Singapore’s total population is projected to hit six million by 2020 from the current 5.3 million. By 2030, the number of people living in the city-state could be between 6.5 million and 6.9 million, according to a government white paper released Tuesday.

The National Population and Talent Division’s (NPTD) report sets out Singapore’s population policies to address future demographic challenges amid increasing complaints from Singaporeans over the large presence of foreigners in the country.

Currently, two out of around five people in Singapore are foreigners.

According to the paper, Singapore’s resident population comprising of citizens and permanent residents will reach somewhere between 4 million to 4.1 million by 2020. Of that number, Singaporeans are seen to make up 3.5 million to 3.6 million.

The projections depend on fertility trends, life expectancy, as well as social and economic needs, NPTD said in the paper.

Without immigration, the citizen population will start to shrink from 2025 onwards, it added, noting that to stop the population from shrinking, Singapore will need  15,000 and 25,000 new citizens each year, based on the current total fertility rate (TFR) of 1.2. 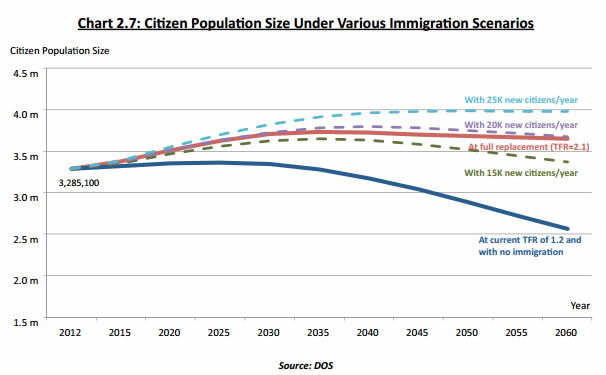 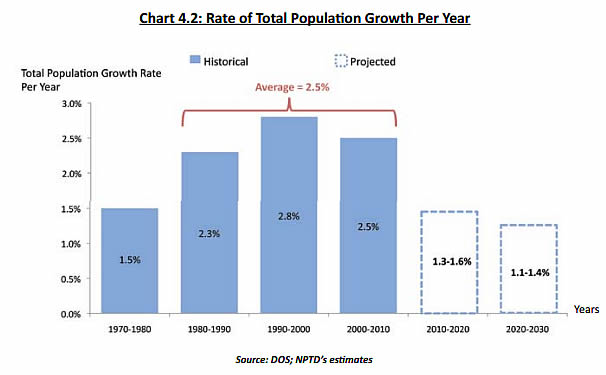 The rate of total population growth per year is expected to decrease. (NPTD image)

The White Paper outlines the Government’s policies to maintain a strong “Singaporean core” in the population, create good jobs and opportunities for citizens and build a high quality living environment.

With the Government taking in between 15,000 and 25,000 new citizens and 30,000 Permanent Residents each year — to prevent the citizen population from shrinking — it is estimated that the resident population could reach up to 4.1 million in 2020, with citizens making up 3.5 million to 3.6 million.

In 2030, the resident population, which includes PRs, is projected to be between 4.2 million to 4.4 million. Citizens will make up 3.6 million to 3.8 million.

The White Paper also projected that come 2030, two thirds of Singaporeans are expected to be working in Professionals, Managers, Executives and Technicians jobs, compared to just half of the population today.

Hence foreign workers are needed to “supplement” the workforce, and ensure the workforce structure has a full range of skills, backgrounds and experiences to serve economic, social and infrastructure needs.

To alleviate the strains Singaporeans face today and support the projected population of about 6 million, efforts to ramp up infrastructure developments, such as transport networks, housing and access to healthcare, are underway and will be completed by 2020.

The Government is also planning and investing in infrastructure ahead of demand.

This includes setting aside land for 700,000 more homes, and planning for more jobs, green spaces, recreational and sports facilities to be located nearer to residential areas like Jurong Lake District, Paya Lebar Central and One North.

The Singapore MRT network will also double to 360 km, which will put eight in 10 homes within a 10-minute walk from a train station.